Different Class by Joanne Harris is a psychological thriller which left me guessing, almost to the very end of the book.

The story is set in St Oswalds Grammar, a boys school in Mawbry, a fictional town in England. Joanne Harris’s Gentlemen & Players and Blueeyedboy are also set in Mawbry and share some characters, although Different Class can be read alone.

The story is alternately told by two narrators, whose chapters are represented by a white or a black chess king. The white king’s chapters are told by an elderly Latin teacher, Roy Straitley, who has taught at St Oswalds for over thirty years. Mr Straitley is a traditionalist, who has few interests outside of the school. He is passionate about St Oswalds, teaching and his form, who are known as his ‘Brodie Boys’.

The black king is more of an unknown quality. I didn’t know who he was almost until the end of the book, despite guessing at his identity throughout. The black king was a former pupil at St Oswalds and is clearly troubled, with a history of killing animals and possibly even other children.

The black king becomes more and more dangerous as the book continues through time until the present, with the anticipation building as the black king’s state of mental health becomes more unsettled. A former English Master’s death, after having been jailed for twenty years after being found guilty of sexually abusing a student at St Oswalds, sets the drama in motion.

The Gospel of Loki by Joanne M Harris 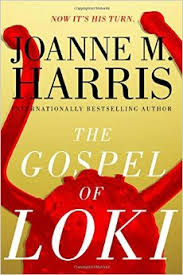 So shoot me, I hate novels with character lists. I figure if I need a character list to keep everyone straight, then there are probably too many characters in the book. But because the character list in The Gospel of Loki was by Joanne M Harris, the author of Chocolat, I read on.

The Gospel of Loki are stories of the Gods from Norse mythology, told by Loki, a trickster from Chaos. Against all of the rules, Loki left Chaos to live with Odin, Thor and the rest at Asgard, Odin’s citadel with 24 halls, (one for each god). Loki’s nature is to create havoc and he does. He constantly gets into trouble, usually because of his tendency to be a smartarse, and then gets out of trouble again, by way of a trick.

Each chapter could be read as a stand alone story. One of my favourites was of Thor dressing as a bride in order to retrieve his hammer from the Ice Folk with Loki’s assistance. The story of the beautiful Freyja selling herself for a gold necklace is good too. The gods are apparently as full of envy, lust, wrath and other sins as everyone else is.

Loki, who calls himself ‘Yours Truly,’ comments that clever people aren’t usually popular and he is right – think how much money sportspeople get paid compared to scientists. But in Loki’s case what he says is true because his pranks, however clever, harm the gods. The gods are often physically hurt or emotionally traumatised and are very often embarrassed by Loki’s interference in their lives.

Loki’s confusion about the taboos surrounding sex made me laugh, and so did his stories, which in the beginning of the book showed the Gods at the peak of their powers (and popularity). Loki’s arrival in Asgard was the beginning of the end for Odin and his fellow gods who had previously ruled their particular World. Loki comments that the Worlds never end though, as Order and Chaos simply take their turn at being in charge.

The story is full of runes and glams and gold and magic. I remember Thor comics from my childhood, but am otherwise completely unfamiliar with Norse mythology. I can see that changing sometime soon though. When I finished The Gospel of Loki I went back to the beginning of the book and read the character list. And enjoyed it. As Loki would say, “So shoot me.”