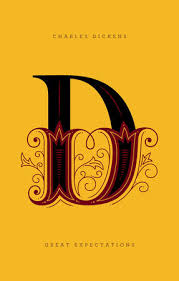 I had assumed I would suffer through Charles Dickens’ Great Expectations but instead, I loved this story. I was particularly dreading was the time this book would take to read, because Dickens can’t be read quickly, but on that score at least, I was right. I’m a fairly fast reader, but I seemed to be reading this story for weeks.

I read this on the train to and from work, at home in between doing housework, while I was cooking (Pear Jam included) and the last thing at night; at times I felt as if I would never finish the book. In an ideal world Great Expectations would be read aloud, but when I checked audible I found that the length of the version with Michael Page narrating goes for 18 and a half hours! Sadly I just don’t have that much time available. One day…

Great Expectations is a story told in three volumes. Volume One starts with Pip, the narrator, living in a small English village with his angry, abusive sister and her kind, generous husband Joe. Joe is a blacksmith and is, I meantersay, my favourite character in the whole book – more about him later. Pip is an orphan so Mrs Joe is credited with “bringing him up by hand,” which seems to be more of an euphemism for her belting Pip regularly. Pip is expected to become apprenticed to Joe in due course, and Joe often refers to the great larks they will have together then, presumably while out of Mrs Joe’s long reach.

The first big event of the story has Pip coming across an escaped convict hiding in the village churchyard. He frightens Pip into supplying him with food and drink, plus a metal file of Joe’s so he can escape his manacles. Soon after, though, the convict is recaptured and returned to the nearby prison ships.

Next, Pip is engaged to visit and amuse a local recluse, Miss Havisham, who was left many years ago at the altar by her bridegroom. Since then, Miss Havisham has worn her wedding dress while she sits in the room where her wedding feast was to be held surrounded by mouldy food, cobwebs and mice. There Pip meets and falls in love with Miss Havisham’s ward Estella, who Miss Havisham encourages to make Pip fall in love with her and so break his heart.

Volume One ends with a London lawyer, Mr Jaggers, visiting Pip to tell him he has the opportunity to go to London to become a gentleman, at the bequest of a benefactor who wishes to remain anonymous. Pip is keen to do so because he believes that Estella will never want him as he is, a humble blacksmith’s apprentice.

Volume Two follows Pip, who is now an impressionable young man on his way to becoming a gentleman in London. Pip makes a true friend of Herbert Pocket, a delightful young man with no expectations of his own, and of Mr Wemmick, Mr Jagger’s henchman. Mr Wemmick looks like a post box and lives by the motto that ‘work is work and home is home,’ but Pip gets to know the ‘at home’ man and finds him to be as kind and generous as Joe, particularly to his elderly, deaf father, the ‘Aged P.’

While Pip is living in London, Mrs Joe dies following a mysterious accident which damaged her brain. Pip attends her funeral but by this time, he has become embarrassed by Joe’s simple manners and no longer appreciates his many qualities.

Pip continues to slink down to the village to visit Miss Havisham in the hope of seeing Estella, who still treats him indifferently, all the while avoiding Joe. Pip believes his expectations are from Miss Havisham and that eventually, marriage to Estella will form part of his bequest. By the end of Volume Two though, Pip learns who his mysterious benefactor is and has to adjust his thinking.

Volume Three weaves and winds, eventually tidying up all of the mysterious and questions raised in the first two volumes. During this part of the story Pip has to make difficult decisions, and learns some hard lessons about loyalty and character.

The characters and their names are delightfully descriptive. Mr Pumblechook is bossy and self-important, while Mr Wopsle is a church clerk who wants to be an actor. Dolge Orlick is a bully who argues constantly with Mrs Joe, while Flopson is a children’s nurse, falls over her mistress constantly. Estella is obviously a stunning young woman, and Miss Skiffins with her variety of coloured gloves, is Mr Wemmick’s ‘lady-friend.’ Drummle is a brutish young man who Pip meets in London and Abel Magwitch is the convict with a generous heart.

One of my favourite scenes in this story was Mr Wemmick’s wedding to Miss Skiffins. Mr Wemmick, who treats the whole event as a series of happy coincidences, engineers Pip’s attendance in the most delightful way imaginable. Out walking, “Halloa! Here’s a church!” and so on, until, “Halloa!” said Wemmick. “Here’s Miss Skiffins! Let’s have a wedding.” I nearly cried with joy while reading about this wedding myself.

I have to confess, I’m a little in love with the character of Joe, who reminds me enormously of my very own He Who Eats All of Our Leftovers. Both are good and kind, loyal and honourable and put up with a lot, although I like to think I’m in no way near as bad-tempered as Mrs Joe.

Sadly, Estella marries the brutish Drummle to avoid letting her heart to thaw towards Pip. I know she wanted to love Pip, but Miss Haversham trained her too well. I’m happy to say that Miss Haversham eventually saw the error of her ways.

I’m planning to watch a film version of Great Expectations sometime soon, then will wait a while before reading my next Charles Dickens’ story.

Great Expectations was book two for my Classics Club challenge to read 50 classics before my challenge end date of 26 August 2023.

You know how runners are always telling people who don’t exercise (or want to) that they have just finished a marathon or how skinny people smugly tell dieters they can eat anything they like? Well, I have a touch of that annoying tendency to brag in me too, because I have just finished reading…..drumroll please……my first Charles Dickens book, Hard Times.

I was actually inspired to see what I have been missing out on after reading a review by FictionFan of A Tale of Two Cities (link to FictionFan’s review below). FictionFan recommended I start with either A Tale of Two Cities or Bleak House, but Hard Times was the shortest Charles Dickens novel I could find. (Maybe I’m not worthy, but I do deserve some credit for honesty here).

I won’t lie, I found reading Charles Dickens harder than reading a contemporary novel. The language was really flowery and the characters use a lot more words in their conversation than I am used to. I even found myself saying some of the character’s lines aloud to try and get a feel for the language, particularly those who had broad accents, as Charles Dickens wrote their voices as they would have sounded to him. If I was speaking with some of these characters in real life, I would have been nodding a lot with a confused smile on my face while I pretended to understand them. More fool me though, because that’s how I’ve ended up doing a lot of dumb things, nodding and agreeing when I haven’t really understood what is going on.

Hard Times tackles some very big subjects, including social inequality and in particular the terrible conditions of the working class, the need for divorce and unequal marriages, amongst others. I had been expecting seriousness (the novel’s title is a big giveaway), but it was a surprise to find the character’s traits so exaggerated and the moral of the story to be told with humour. The characters are almost caricatures, made up of their best and worst tendencies. Their names told me exactly what to expect of them – Mrs Sparsit was an interfering old sticky-beak, Mr Gradgrind a man with no room in his character for frivolity or fancy, Mr Bounderby – a braggart business man who prides himself on his success and Mr Harthouse – a would be lover.

I didn’t expect Charles Dickens to be so funny. A physical description of a male character’s legs included the information that they were “shorter than legs of good proportion should have been.” Nothing much has changed since Charles Dickens time though, because in Australia we still say that a short-legged person’s arse is too close to the ground, and then fall about laughing. I had no idea that Charles Dickens wrote slapstick comedy.

The story, although told with humour and the author’s obvious affection for the characters, is not a happy one. It begins with the Gradgrind family, made up of Mum, Dad, Louisa, Tom and some smaller children. Mr Gradgrind, although a school superintendent, is a foolish man, to whom ‘facts’ are all important, and he has no tolerance for fun or make believe in his family’s lives. Louisa, although dearly loved by her father, is eventually married to Mr Gradgrind’s friend Mr Bounderby, who is much older than Louisa. Even though she is repulsed by Mr Bounderby, Lousia accepts this marriage out of duty to her father and also to promote her brother Tom’s interests with Mr Bounderby.

Mr Bounderby believes that his employees expect to become rich working for him, although the opposite is true. Hard Times is set in a fictional town, ‘Coketown,’ which is horribly polluted by the factories that have made Mr Bounderby wealthy. When the working class unite to try and force better pay and conditions, Stephen Blackpool, a worker with a wife he would have divorced if the option had been available to him (and an accent I struggled to decipher), stands alone, unable to join the union. Stephen is alienated by his fellow workers and then fired on a whim of Mr Bounderby’s. With no possibility of gaining employment in his hometown, Stephen has to leave Coketown, and when Tom Gradgrind steals money from Mr Bounderby’s bank, he sets things up so suspicion fall on Stephen.

Tom is a selfish, no-good, who the narrator calls ‘The Whelp.’ He is responsible for introducing his sister Louisa to Mr Harthouse, who tries to embroil her in a romance. Of course Mrs Sparsit learns of the would-be romance and tries to damage Louisa’s good name with her nasty information. I kept wishing that Mr Bounderby and Mrs Sparsit had married each other in the first place, because they deserved each other.

All of the story lines are finished satisfactorily by the end of the novel, although some characters enjoy happy endings while others do not.

I’ll give myself a little holiday and read some lighter stories next, but will work my way through other novels by Charles Dickens eventually. In the meantime I’ll be congratulating myself on having made a beginning, although I hope not in a Mr Bounderby way…