Bridge of Clay by Markus Zusak

Bridge of Clay is by Australian author Markus Zusak, who also wrote The Book Thief and The Messenger.

It took me a while to connect with the story in Bridge of Clay but once I did, I was unable to put this book down. Even now, a week after finishing the book, I haven’t quite let go of the story’s characters.

The story of the Dunbar family is told Matthew Dunbar who is the eldest of five boys living in a ramshackle house next to a racecourse in Sydney. Matthew tells the story of the Dunbars through the eyes of his brother Clay, who knows all of the family’s stories and secrets. It includes the story of their parents, Penelope, sometimes called the Mistake-Maker or the Broken-Nosed Bride and of his father Michael, otherwise known as the Murderer. It is also Matthew’s own story of looking after his brothers, Henry the scammer, Rory the ferocious, Tommy the baby and of course Clay, who binds the family together when things went terribly wrong from the family.

Matthew tells his family’s stories in great detail, with descriptions that initially seemed corny to me. His voice is occasionally abrupt and the story is told in bits and pieces, which jump around in time and place. I think my initial dislike of Matthew’s voice was what took me so long to connect with the story, however once I figured out that Penelope taught all over her children to love Homer’s works, Matthew’s narration style made sense. It also explained why all of the family’s animals were named after Homer’s characters, including Achilles the mule who had figured out how to get into the kitchen from the backyard.

The stories eventually link together to make a complete family saga. I formed enough of a connection with the characters and their lives to need tissues as I sniffled through their sorrows and I also laughed aloud a couple of times too, never a good look on a crowded train… I also loved how Australian Bridge of Clay is and that the characters share a love of Australian stories and legends, including that of Phar Lap.

I plan to re-read Bridge of Clay eventually to pick up on anything I missed the first time.

The Messenger by Markus Zusak 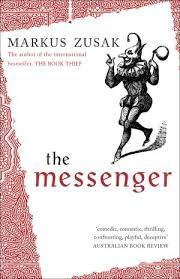 Markus Zusak, who wrote The Messenger, is probably best known for having wrote The Book Thief. I haven’t read The Book Thief, but I saw the movie and howled buckets. So I was expecting great things from The Messenger, which won the Children’s Book Council Book of the Year Award and the 2003 NSW Premier’s Literary Award Ethel Turner Prize in Australia (Young Adult category).

The Messenger‘s main character is Ed Kennedy, a twenty year old taxi driver. Ed grew up and continues to live in a low socio-economic area of a city. When he isn’t working, Ed bums around with his friends, mostly playing a card game called Annoyance. Ed is in love with Audrey, who has a series of boyfriends who come and go. Ed has a dog called The Doorman and a mother whose blood pressure seems to rise every time she sees him.

Things change for Ed when he prevents a bank robber from getting away and he becomes a hero. After this, Ed receives a card in the mail, the Ace of Diamonds, with three addresses on it. Ed visits each of the homes, and realises that he needs to do something for each of these families to make the world a better place.

When Ed completes these tasks, he is sent other aces with cryptic clues to solve. Again, each of the clues lead him to a task. The tasks vary enormously, from assisting a woman who is regularly being raped by her husband, to befriending a lonely old woman.

Ed is a likeable character, funny and honestly telling his story as he sees it. The words are perfect. Ed’s voice is ocker, with a broad Australian accent that is familiar and endearing to me, even though dialects in stories usually annoy me to the point of not finishing a book. His voice is often funny, although at other times the emotion made me feel exactly as the author intended, sad, angry, flattened, hopeful or hopeless.

“Have you ever noticed that idiots have a lot of friends? It’s just an observation.”

“I was always reading books when I should have been doing math and the rest of it.”

The Messenger reminded me a little of Jostein Gaarder’s Sophie’s World. Maybe this might mean that The Messenger is predictable for some readers, but for me, I found the story and the message to be inspiring.