Watching You by Michael Robotham 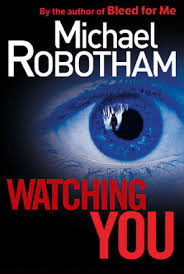 Watching You is another fast and enjoyable read by Michael Robotham, although I wasn’t as tempted to stay up all night reading this as I have been with some of his other books.

The story follows a single mother of two, Marnie Logan, whose husband Daniel mysteriously disappeared a year ago. Marnie is working as an escort to pay off a gambling debt incurred by Daniel before his disappearance. When a gangster who pimps for Marnie dies, she is investigated by the police.

Marnie is a heroine who we like and feel sorry for, and as the story unfolds, become concerned for her wellbeing. She is under the care of a clinical psychologist, Doctor Joe O’Loughlin for depression, but Joe is also interested in learning more about Marnie’s complicated past. Historically, people who have done the wrong thing by Marnie have been punished in extraordinarily vindictive ways although it is unclear if Marnie is the perpetrator, or if someone else is acting on her behalf.

The plot is complicated with plenty of twists. During the first few chapters I suspected someone and something and felt very clever until I realised that the author had been playing me! It turns out that I believed what the author wanted me to all along! When I figured out exactly who to be worried about – once the author was ready for me to know, I then had the worry of watching if everyone would be okay…

Most of Michael Robotham’s earlier books feature Joe and another character, Vincent Ruiz, but I’ve been reading them out of order. Watching You worked as a stand-alone, but I intend to read the rest of the series in order.