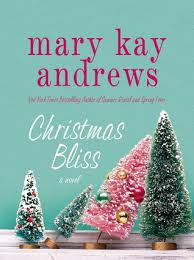 I never read novels by the same author in succession, or even close together usually, but lately I’ve been reading some really good, big novels and just wanted something light and fun to give my brain a break. Plus it’s nearly Christmas and this book seemed timely.

I read Savannah Breeze by Mary Kay Andrews earlier in the year and enjoyed it, and Christmas Bliss by Mary Kay Andrews, featuring the same group of characters, BeBe, Weezie and their circle, gave me the frivolity I needed. This time BeBe is heavily pregnant and Harry is a happy father to be, while Weezie is preparing for her and Daniel’s Christmas Eve wedding at home in Savannah.

Weezie becomes suspicious of Daniel’s relationship with the glamorous owner of the New York restaurant where he has been working as a special guest chef, so when he becomes sick Weezie hops on a plane to New York to nurse him. Happily for Weezie, Daniel’s boss is lovely and her fears were completely unfounded. Weezie gets to do all of the things she has ever dreamed about while in New York the week before Christmas.

BeBe, in the last month of her pregnancy, is feeling fat and unlovely. Harry gives her a few frights when he comes home late from deep sea fishing. The only other exciting thing to happen in Christmas Bliss is that BeBe learns she may still be married to husband #2, which would make the terrible Richard the legal father of her and Harry’s unborn baby.

Not much else happens in Christmas Bliss.

Weezie’s parents are just as funny as they were in Savannah Breeze, although her father appears to be suffering from dementia. I wish there had been a recipe included for Weezie’s mother’s dreaded cake, which had a massive build up throughout the book before making it to the wedding buffet. Even a description of the taste would have pleased me.

The characters are lovely, but they don’t have any rollicking adventures the way they did in Savannah Breeze. The whole novel has the feel of a leisurely Sunday afternoon, rather than the excitement of frantic preparations for an upcoming wedding and birth, and the anxiety caused by a former husband casting his long shadow over present and future happiness. Every potential drama resolved itself easily and neatly.

I think Christmas Bliss could have been improved by introducing some different characters and relegating BeBe, Weezie and co into secondary roles. I still like the characters, but there wasn’t enough friction or drama for storyline to really interest me. Still, this book suited my purpose. My brain had a rest.