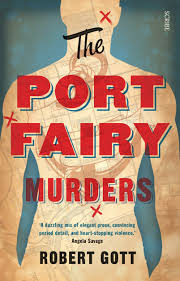 The Port Fairy Murders by Australian author Robert Gott is a sequel to The Holiday Murders. The Port Fairy Murders continues the story of Detective Joe Sable, Constable Helen Lord and Inspector Titus Lambert, all members of the newly-formed Victorian Homicide Department in Melbourne in 1943.

In The Port Fairy Murders, the characters have to deal with the fall-out after they infiltrated Australia First, a particularly nasty political party in the previous book. I’m happy to report that Australia First are fictional, although no doubt there were real groups at the time who were genuinely horrible.

Joe was hurt quite badly physically and emotionally, as was Titus’ brother in law Tom, as they worked to stop a deranged madman and his crazy followers in The Holiday Murders. Several weeks later Joe returned to work, (clearly there was no counselling or time off work for traumatised police officers in 1943). Soon after, Joe’s apartment block was burned down by George Starling, an aggrieved member of Australia First. One of Joe’s neighbour’s died in the fire.

Of particular interest to me was the location of Starling’s family farm at Mepunga, half way between Warrnambool and Peterborough on the Great Ocean Road, which is very near to where I grew up. Starling is such a horrible character that I have mixed feelings about the use of this location as I didn’t like him coming from my part of the world, (NIMBY), but I also loved reading about places so familiar to me.

The photo below is of Murnane’s Bay, where The Port Fairy Murders tells us that Starling often went to as a child to escape his abusive father. 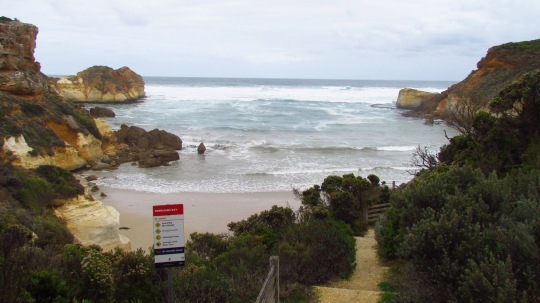 I can’t imagine anyone being lucky enough to come from this part of the world to be a bad person, my imagination just won’t stretch that far. Robert Gott, however, managed just fine.

After the fire, Joe was billeted to stay with Helen, her mother and her Uncle Peter. Joe quickly connected with Peter and has some interesting conversations with him about art after noticing that Peter has had a portrait of himself painted in the style of John Singer Sargent’s famous portrait of Dr Pozzi in his bathrobe.

Meanwhile, Starling is staying at The Windsor Hotel in Melbourne after a visit to his father’s farm. Starling was delighted to learn his father recently died, and visited the farm to steal cash and burn down the house. He also viciously attacked a number of animals on the farm so that the police would realise the fire had been set on purpose. (NIMBY, NIMBY!) Back in Melbourne, Starling killed a few gay men while waiting for an opportunity to kill Joe.

Meanwhile, Joe and Helen were sent to Port Fairy to investigate a double murder, completely unrelated to Starling and Australia First. The author set the scene in Port Fairy well, particularly when it came to the divide between the religions. All of the family stories I grew up hearing had religion in there somewhere, with one mob going to a particular church, school, dances and shops, while the other mob went to their own church, school, dances and shops, saying hello politely on the street but never going to each other’s homes. Heaven forbid anyone married out of their religion. St John’s and St Patrick’s churches in Port Fairy are pictured below…

I also enjoyed the references to other locations around Port Fairy which I know quite well, including Gipps Street, East’s Beach, Pea Soup and of course the pubs; the Caledonian (otherwise known as The Stump) and the Star of the West. 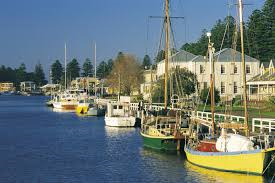 As it turns out, Robert Gott was able to imagine horrible people in Port Fairy too. He does not shy away from describing grisly, violent behaviour, and thoroughly explores all types of nastiness.

The town of Warrnambool gets plenty of mentions too, with a very ordinary meal being had at the Warrnambool Hotel. I can confirm that the food served there is actually very good.

The Port Fairy Murders left the door open for another book in the series as there is plenty of unfinished business. Helen and her mother have secrets from each other, and Joe and Helen have chemistry. George Starling is still on the loose which means that all of these characters, plus Titus and his wife Maude, who I have become quite fond of, are still in danger…

The Holiday Murders by Robert Gott

The Holiday Murders by Australian author Robert Gott is set in Melbourne near the end of World War 2. I chose to read this book as the author has written another book called The Port Fairy Murders, and because I occasionally holiday in the actual Port Fairy, I’m keen to read this book. However, the two books appear to be a part of a series, and The Holiday Murders is first.

The Holiday Murders begins on Christmas Eve in 1943, with a phone call to Inspector Titus Lambert informing him of the vicious murders of a Melbourne father and son. The family are rich and influential, and the murders have been performed with a nod to unusual aspects of the victim’s personalities. A daughter of the family who is an up and coming radio star has been spared, and she goes into hiding.

Inspector Lambert calls in Detective Joe Sable and Constable Helen Lord to assist him in the investigation, which quickly ramps up to involve Military Intelligence, who work out of Victoria Barracks. Military Intelligence suspect that the murderer is linked with a political party which draws on National Socialism for inspiration. The party is alternatively named Australia First, Australian Patriots and Our Nation, which made me snort. I expect supporters of Australia’s current One Nation party dislike the similarity of the names ‘Our Nation’ and ‘One Nation’, which the author must have chosen on purpose. Since One Nation also stirs up trouble and hatred though, the similarity is apt. (Don’t get me started on Australian politics though, as I’ll get up on my soapbox and call the supporters of this type of party idiots, and worse).

Oh yes, The Holiday Murders. Where were we? The characters. Joe and Helen both have difficulties in life and in the investigation. Joe is Jewish, at a time when horrible political parties and gullible fools were attempting to emulate the Nazis and Helen is a woman working in a male field, which can be difficult enough now. Seventy years ago it must almost have been impossible for a woman to be a police officer.

I enjoyed travelling around Melbourne in this story, particularly the references to Victoria Barracks, the Manchester Unity Building and the Windsor Hotel, all of which I am familiar with. (High tea at The Windsor is a Melbourne institution, by the way). During the 1940’s, the Windsor Hotel was the place for the wealthy to stay in Melbourne. The Manchester Unity Building was only ten years old and was at the heart of Melbourne’s business and shopping district, and during World War 2. Victoria Barracks housed the Australian War Cabinet. I think the author chose these iconic buildings very well. 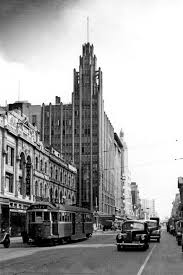 The reader knows from the beginning who carried out the murders, but we don’t know the whole story, (we know ‘who’, ‘what’, ‘where’ and ‘how’, but are missing ‘why’, the most interesting component). We are on the side of the police as they try to find out who the murderers are and what their motives are. I was starting to get a bit worried by the end of the book, as there weren’t many pages left and there was a lot of loose ends to be tied up, but it all came together quickly, with a motive that I didn’t see coming. Things don’t end happily for all of the characters either. The story was a lot darker than I had initially expected, too.

I didn’t enjoy the psychopathic angle of the story, because I’m bit squeamish about gory details. This may not bother other readers though. I didn’t enjoy was the constant sexual references from some very twisted characters either, because I’m a bit prudish, but eventually I got bored with these weirdos and their fetishes, and eventually started thinking, ‘not again’ when they became repetitive.

However, I did enjoy the writing, the familiarity of the Melbourne locations, the goodness of some of the characters, and most of all, that the story made sense. All in all, I’m looking forward to reading The Port Fairy Murders next.