Posts tagged ‘The Hound of the Baskervilles’

The Hound of the Baskervilles by Arthur Conan Doyle 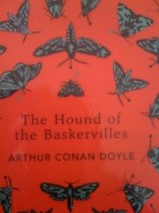 I owned an abridged version of The Hound of the Baskervilles by Arthur Conan Doyle when I was a child, which was read so many times that the book eventually fell to pieces.

I’m not sure why I was prepared to frighten myself all over again as an adult (I had a lot of nightmares about demon-like black hounds as a child), but when I spotted the complete version of the book in the library, I had to find out what I missed out on reading the abridged version.

Not much, as it happens. The adult version of the story seemed a little fuller, but the plot, the characters and the fear were just as I remembered them, skilful and enthralling. I thoroughly enjoyed the book all over again.

Sherlock Holmes is the star of this book. His detective skills are legendary and a great many of the things he said are still quoted (or misquoted) today, although the words “Elementary, my dear Watson,” did not appear in The Hound of the Baskervilles at all. Neither did “No, s**t, Sherlock.” Holmes’s arrogance is legendary, but his belief in his own mental abilities is justified.

In The Hound of the Baskervilles, Sherlock Holmes is engaged to investigate a suspected murder and to prevent a possible upcoming murder. Dr Watson, Sherlock Holmes’s much more likeable sidekick, narrates the story, in a combination of letters written to Holmes, diary entries or by direct narration.

Sir Henry Baskerville inherited the title, Baskerville Hall and an enormous amount of money from his uncle, Sir Charles, who died in suspicious circumstances. Sir Charles seemingly died of a heart attack, trying to run away from a monstrous black hound. The hound is a family legend, or curse, which kills the men of the Baskerville family when they go onto the moor alone at night. (I had no idea what a moor was when I was reading this book over and over as a child, but I didn’t like the sound of it).

I won’t give away any more about the plot, or tell ‘who dunnit’ to the six people in the world who are not familiar with this story, but it is an enjoyable read, with good characters and an interesting plot. Be warned though, after reading The Hound of the Baskervilles you may become anxious crossing paths with big black hungry dogs. Some of my anxieties appear to have returned.